Platinum, gold, palladium and silver are the only four metals that can be hallmarked in the UK. These hallmarks indicate the metal, its purity percentage and where and when it was hallmarked. The 1973 Hallmarking Act makes it unlawful to describe an item over a certain weight as gold, silver, platinum or palladium without an independently applied hallmark.

When it comes to manufacturing jewellery and silverware, precious metals are rarely used in their purest form. Instead, they are usually alloyed with lesser metals to achieve a desired strength, durability and colour. It is not possible to detect the precious metal content of an item by sight or by touch. It is therefore a legal requirement to have items consisting of silver, palladium, gold or platinum independently tested and then hallmarked before they can be described as such. Items must bear a hallmark at point of sale and follow these simple rules:
For articles that are below the UK hallmarking Act's mandatory weight for hallmarking, F.Hinds operates a separate due diligence process which involves periodic voluntary testing of items that fall below the mandatory weight to ensure they meet the minimum fineness requirement.

We are an Assay Assured Jewellery Retailer. This status is only given to retailers who have been independently audited and verified by Assay Assured. Assay Assured is run and overseen by the Edinburgh Assay Office and ensures all precious metal jewellery (apart from items exempt by weight) are independently tested and hallmarked.

Find out what a hallmark looks like here or read on below.

Your Guarantee of Purity

Unless specifically described otherwise, any precious metal item on our website will be of the fineness shown below:
All of our precious metal products comply with the Hallmarking Act so you can be confident that what you buy from F.Hinds is 'real' and as described. Many overseas websites are not bound by UK law and cannot offer you the same guarantee that the items they sell are genuine. All items are hallmarked if above the minimum weight; anything below these weights is exempt from hallmarking but is still guaranteed to be of the same minimum fineness.

Silver plated items are not usually hallmarked as the fineness of the plating will vary across the products we sell, however all products described as 'Silver Plated' will be of a minimum fineness to be described as such.

i) Sponsor's Mark or Maker's Mark. This shows the person or company responsible for sending the article to the Assay Office. The sponsor may be the manufacturer, retailer or importer

ii) Assay Office Mark. There are 4 British Assay Offices: Birmingham, Edinburgh, London and Sheffield, each with their own Mark 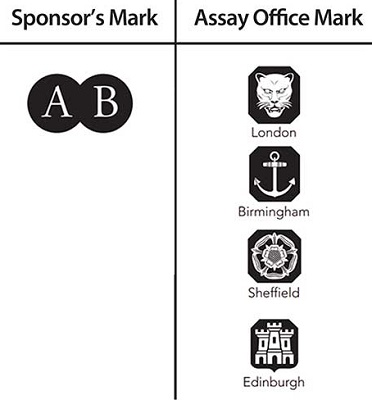 The Birmingham Assay Office also operates a satellite operation based in India where a lot of jewellery is manufactured. This allows goods to be marked at source, speeding up delivery of goods to retailers in the UK. Their mark looks like this:

iii) Fineness Mark i.e. the purity of the metal in parts per thousand: 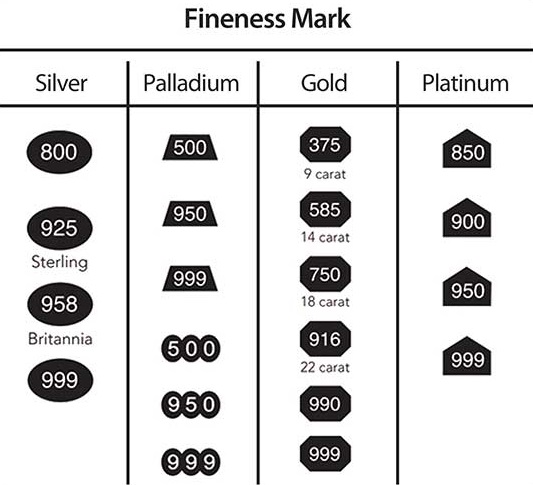 This may help identify the retailer or manufacturer, the year, range or the type of jewellery hallmarked. Examples:

History of the British Hallmark

In 1238, Henry III commanded the Mayor of London to appoint six faithful and discreet goldsmiths who would be responsible for ensuring standards for gold and silver articles. Later, Edward I passed a statute requiring not only that all silver articles were to be of sterling standard, the same as coinage, but also that they were to be assayed by the Wardens of the Goldsmiths' Guild and marked with a leopard's head.

In 1327 the Goldsmiths' Guild received its first Royal Charter from Edward III which confirmed its responsibility for assaying and marking. The Worshipful Company of Goldsmiths, as the guild was later called, is still responsible for the London Assay Office.

Under another statute in 1363, makers were ordered to stamp their own distinguishing marks alongside the leopard's head. Originally, the maker's mark took the form of a device, such as a cross or a fish; later it became the practice to use the initials of the worker or firm.

In December 1478, the company appointed a salaried Assayer and compelled makers to bring their completed silverwares to Goldsmiths' Hall to be assayed and marked before they were offered for sale. This practice has continued to the present day and is the origin of the word 'hallmark'.

In the same year, an additional mark - the date letter - was introduced by the Company. This consisted of a letter of the alphabet, which was changed annually. When one alphabet cycle was completed, the style of the letter or its surrounding shield was altered.

Hallmarking continued during succeeding centuries at Goldsmiths' Hall and at the Assay Offices which later opened in other towns, such as Newcastle, Exeter and York, where there were working goldsmiths and silversmiths. In Scotland, there were goldsmiths working at a date as early as in England. The earliest records pertain to the goldsmiths of Edinburgh. An Act of Parliament was passed in 1773 establishing Assay Offices in Birmingham and Sheffield.

Several of the provincial offices have now closed - Newcastle, Exeter and York in the 19th century, Chester in 1962 and Glasgow in 1964. The Dublin Assay Office, whose origins date from the early 17th century, continues to operate in Ireland.

In England, offices for the assay and hallmarking of gold and silver date back to the year 1300 when a Statute of Edward I instituted our hallmarking system. The initial purpose of the system was the same as it is today; the protection of the public against fraud and of the trader against unfair competition. It was in fact, one of the earliest forms of consumer protection.

Unless specifically exempted articles made of precious metals may not be sold as such in the UK unless they bear hallmarks.

Through the centuries gold and silver have been alloyed with other metals because in their pure state they are too soft to make jewellery and tableware etc.

However, it is impossible to tell by eye alone how much of the cheaper base metals have been used in the hardening process. Even gold plating a few microns thick looks like solid gold when new. The high price of precious metals has also tempted the dishonest to use substandard alloys, thus increasing their profits. Without hallmarking, this fraud is very difficult to detect and those who suffer from it are not only the final purchasers of the goods but also the honest manufacturers and retailers competing against the less scrupulous.

The need for protection against such fraud was recognised in England seven centuries ago. A statute of 1300 laid down the standards for gold and silver, and introduced a system of independent testing and hallmarking, carried out before the articles were put on sale. If there was no such testing, once substandard articles have reached the shops, it would be too late to catch more than a small proportion of them. The British independent hallmarking system for gold, silver and (since 1975) platinum protects us all. 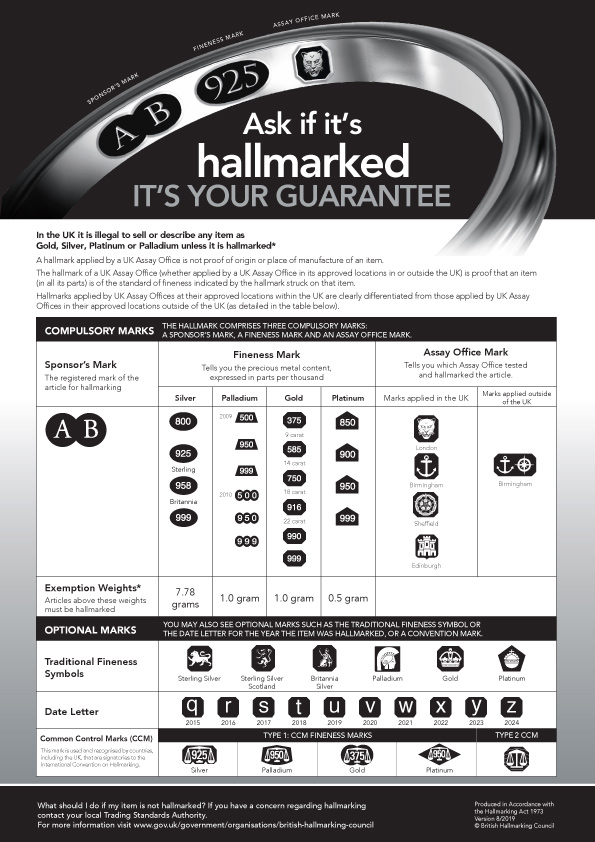 Whoa, your list is full right now. You can compare 6 products at a time. Select the products you want to remove

You can compare 6 products at a time. Right now you have 7 products in your list. Remove a product from the list before doing the comparison.